Ozone: noun \’ō,zōn\: a colorless gas with a pungent odor and powerful oxidizing properties, formed from oxygen by electrical discharges or ultraviolet light. It differs from normal oxygen (O2) in having three atoms in its molecule (O3).

Ozone has existed on Earth for as long as oxygen has been here- about 500 million years. It has existed in our universe for billions of years. Wherever oxygen comes into contact with an electric arc, such as lightning and/or a particular wavelength of ultraviolet rays, like those from the sun around which the planet orbits, ozone will be created.

Ozone, (O3), also known as “activated oxygen” or “atomic oxygen”, contains three atoms of oxygen rather than two atoms that constitute the Oxygen (O2) that we normally breathe. Ozone is one of the most powerful sterilizer in the world and can be used to destroy bacteria, viruses and odors. Ozone can be found quite readily in nature and occurs most often as a result of lightning strikes that occur during thunderstorms. The Sun’s UltraViolet light also create ozone. 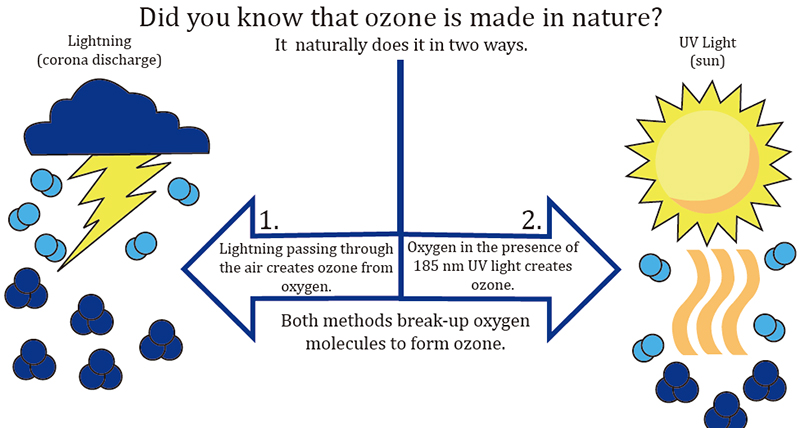 During an electrical storm, bolts of lightning in the atmosphere rip oxygen molecules apart, leaving single oxygen atoms in their wake. These single atoms quickly bond with surrounding O2 molecules, creating O3, or ozone. That “fresh, clean, after-the-rain” smell that we notice after a storm (and that has been synthesized in many laundry fabric softeners) most often results from nature’s creation of ozone. Lightning is nature’s air purifier. Our familiarity with ozone is directly tied to the “ozone layer” that circles the planet above the earth’s atmosphere and the damage caused to it that has made it newsworthy over the 35 plus years due to carbon emmisions and pollution. The ozone layer in the lower stratosphere is also generated by molecular fission and fusion, but by the sun’s short wave ultraviolet rays rather than by electricity. Coincidentally, it’s this ozone layer- created by short UV waves, that protects life on our planet from the longer UV waves within the spectrum.

This atomically charged atom will readily attach itself to other odor molecules and when it does the Ozone (O3) molecule reverts back to Oxygen (O2). This happens as the unstable third atom seperates from the other two. When contaminants such as odors, bacteria or viruses make contact with ozone, their chemical structure is changed to less odorous compounds. As more ozone attacks the remaining compounds, the odor is eventually destroyed. This process is called oxidation. Ozone essentially reverts back to oxygen after it is used. This makes it a very environmentally friendly oxidant.

Ozone generators are designed to produce ozone, and are sometimes sold as whole house air cleaners. Unlike ionizers, ozone generators are intended to produce significant amounts of ozone, a strong oxidant gas which can oxidize many other chemicals. The only safe use of ozone generators is in unoccupied rooms, whereby a “shock treatment” in the air is utilised by a commercial ozone generator. Restoration contractors use these types of ozone generators for cleaning and purifying air, to remove smoke odors after fire damage, musty smells after flooding, mold (including toxic molds), and the stench caused by decaying flesh which cannot be removed by bleach or anything else except for ozone. Ozone used in industry is measured in µmol/mol (ppm, parts per million), nmol/mol (ppb, parts per billion), µg/m3, mg/h (milligrams per hour) or weight percent.

UltraViolet (UV) ozone generators, or Vacuum-UltraViolet (VUV) ozone generators, employ a light source that generates a narrow-band of UltraViolet light, a subset of that produced by the Sun. The Sun’s UV sustains the ozone layer in the stratosphere of Earth. UltraViolet light creates ozone when a wavelength at between 185 and 254 nm (nano-meters) hits an oxygen atom (see below). These atoms combine with another oxygen molecule (O2) to form ozone (O3). Uvonair® UV ozone generators use a fan to propell ambient air over a UV bulb for ozone production. The production of ozone is instantaneous. There is no need for expensive off-gas mechanisms, and no need for air driers or oxygen concentrators which require extra costs and maintenance thus making UltraViolet generators less expensive and very convinient to use.

Corona Discharge creates ozone by applying high voltage to a metallic grid sandwiched between two dielectrics (see below). The high voltage passes through the dielectric to a grounded screen/plate and in the process ozone is formed via an electrical discharge that is diffused over the area using the dielectric to create corona discharge. Oxygen that is pressent in the chamber is passed through this corona discharge and is converted to ozone. Corona Discharge is the most common type of ozone generator for most industrial uses. While variations of the “hot spark” coronal discharge method of ozone production exist, including medical grade and industrial grade ozone generators, these units usually work by means of a corona discharge tube. They are typically cost-effective and do not require an oxygen source other than the ambient air to produce ozone concentrations of 3–6%. The most common applications for Corona Discharge ozone generators are “in-duct” or “in-line” systems whereby forced air is circulated and exausted through an HVAC sytem to elliminate unwated odors.

How Long Does The Ozone Last?

As soon as ozone is formed in the generator and dispersed in a room, it will start to revert back to oxygen. This step occurs by several processes including the following: Oxidation reactions with an organic material such as odors or smoke. Reactions with bacteria etc., which again consumes ozone by oxidation reactions.

Additionally ozone breaks down thermally. Temperature and humidity play a large role in how much ozone is being produced using traditional generation methods (such as corona discharge and ultraviolet light). Old generation methods will produce less than 50% of nominal capacity if operated with humid ambient air, as opposed to very dry air. Higher temperatures destroy ozone quicker than lower temperatures. The ozone that remains is referred to as Residual ozone. “Residual” ozone created will return to oxygen usually within 30 minutes, in amounts equal to half its level. What this means is that after each subsequent 30 minute period there would be half as much residual ozone left at the end of the period as was present at the beginning of the period. This is similar to a geometric progression of 16;8;4;2;1. In practice the half life is usually less than 30 minutes due to temperature, dust, and other contaminants in the air. This quick degradation process is the result of the weak bond holding the third oxygen atom to the molecule. Therefore, ozone, while very powerful, doesn’t last long. It does its job and then disappears back into safe oxygen.

Will The Odor Come Back?

No. If ozone is applied properly it destroys the odor at the source. Treatment times may vary depending on the strength of the odor but 98% of ozone treatments are successful. In the case of mildew the odor will return if you are unable to get rid of the moisture that is the source of the mildew.

What Is The Right Level Of Ozone?

The right level is when all the generated ozone is being consumed. This only applies to continuous ozone use in occupied environments not for shock treating. However, this is difficult to attain because it becomes a balancing act. Initially the machine’s output is set high to get rid of the problem odor as quickly as possible. As this is being accomplished less ozone is required for the diminishing odor etc., thereby leaving some residual ozone in the air. If the machine output is not turned down, then more residual ozone will remain. If a strong smell of ozone is noticed, then there is more ozone present than is required. Simply decrease the rheostat (output level control) if available or use a timer to adjust the operating time accordingly. With ozone, MORE IS NOT CONSIDERED BETTER! One must be careful when using ozone in a occupied environment. NOTE: It is not necessary that ozone be detected by humans for it to be effective. Ozone can work even when humans are not able to smell it.

Is Ozone Safe, Harmful And What, If Any, Are The Long Term Effects?

Ozone was discovered almost a two centuries ago, so a great deal is known about it. Several regulatory agencies, including the Occupational Safety and Health Administration (OSHA), have stipulated that the safe allowable level of residual is 0.1 ppm (parts per million). Note that this permissible level is for continuous exposure throughout an entire 8 hour day. The temporary affects of such a low exposure would range from headaches, to sore throats, irritation in the eyes, and nose. No long term effects have ever been documented from ozone exposure. Ozone is safe if used correctly. However, high concentrations of ozone can cause health problems if proper safety measures are not taken.

There is a lot of conflicting information out there regarding how safe ozone use is in the hydroponic, automotive, janitorial and restoration industries. Using the proper precautions can help everyone avoid any side effects at all. By way of comparison, carbon monoxide (CO) is considerably more dangerous, being responsible for 2,500 deaths annually, yet we think nothing of walking down the street in heavy traffic, alongside countless huge carbon monoxide generators (cars). And here’s one of the most beautiful things about using ozone- the only residue resulting from the generation of ozone is oxygen (O2). When used properly and a few simple rules are followed, ozone can be a safe and effective tool.

How Does Ozone Kill Bacteria?

Ozone kills bacteria by destroying the cell wall of the bacteria. Once the cell wall is destroyed, the bacteria will be unable to survive. As mentioned above in “How Does Ozone Work”, the atomically charged third atom that is responsible for the formation of the Ozone (O3) molecule will readily attach itself to other odor molecules and when it does, alters the odor’s chemical structure to less odorous compounds.

As this occurs, the Ozone (O3) molecule reverts back to Oxygen (O2). This happens as the unstable third atom seperates from the other two as it interacts with the foreign odor molecules. When contaminants such as odors, bacteria or viruses make contact with ozone and the ozone attacks the remaining compounds, the odor is eventually destroyed. This process is called oxidation. Ozone essentially reverts back to oxygen after it is used. This makes it a very environmentally friendly oxidant.